Two years of Bestr: how Open Badges are growing in Italy

Who creates Badges, for which topics and with how much success: a little data from the first 2 years experience of the Italian Open Badge platform
July 14, 2017

In many parts of the world work is going on at the moment to take the idea of Open Badges from the hype stage, of experimentation and pilot programmes, to the coveted plateau of productivity.

Bestr mission is, precisely, to make Open Badges a useful and used tool for the environments of training and work, as well as for learners, starting with Italy, but not ending there.

With the second year of activity of the Bestr platform completed, we analyse the data, to understand how the organisations and learners interpret the tool that is on offer and if we can gather any indications to make it even more useful.

Organisations, Badges, Learners: the dimensions of the growth

The use of Open Badges is deepened by the organisations, who have adopted the model, involving a constantly growing number of learners.

The growing number of people involved is not countered by a decline in involvement of the learners; the claim rate, in other words how many learners actually collect the Badges they are entitled to, has only fallen in a tiny measure; moreover, one learner out of 10 has obtained more than one Badge.

The aim of Bestr – and of the Open Badges – is to offer a means of recognition of competencies that is homogeneous, regardless of variables in learning opportunities, whether formal, non-formal or informal. For this reason, the Organisations operating within Bestr are of various types, including the most formal universities, non-formal trainers (professional training, for example), associations (typically places for informal growth of competencies) and companies. 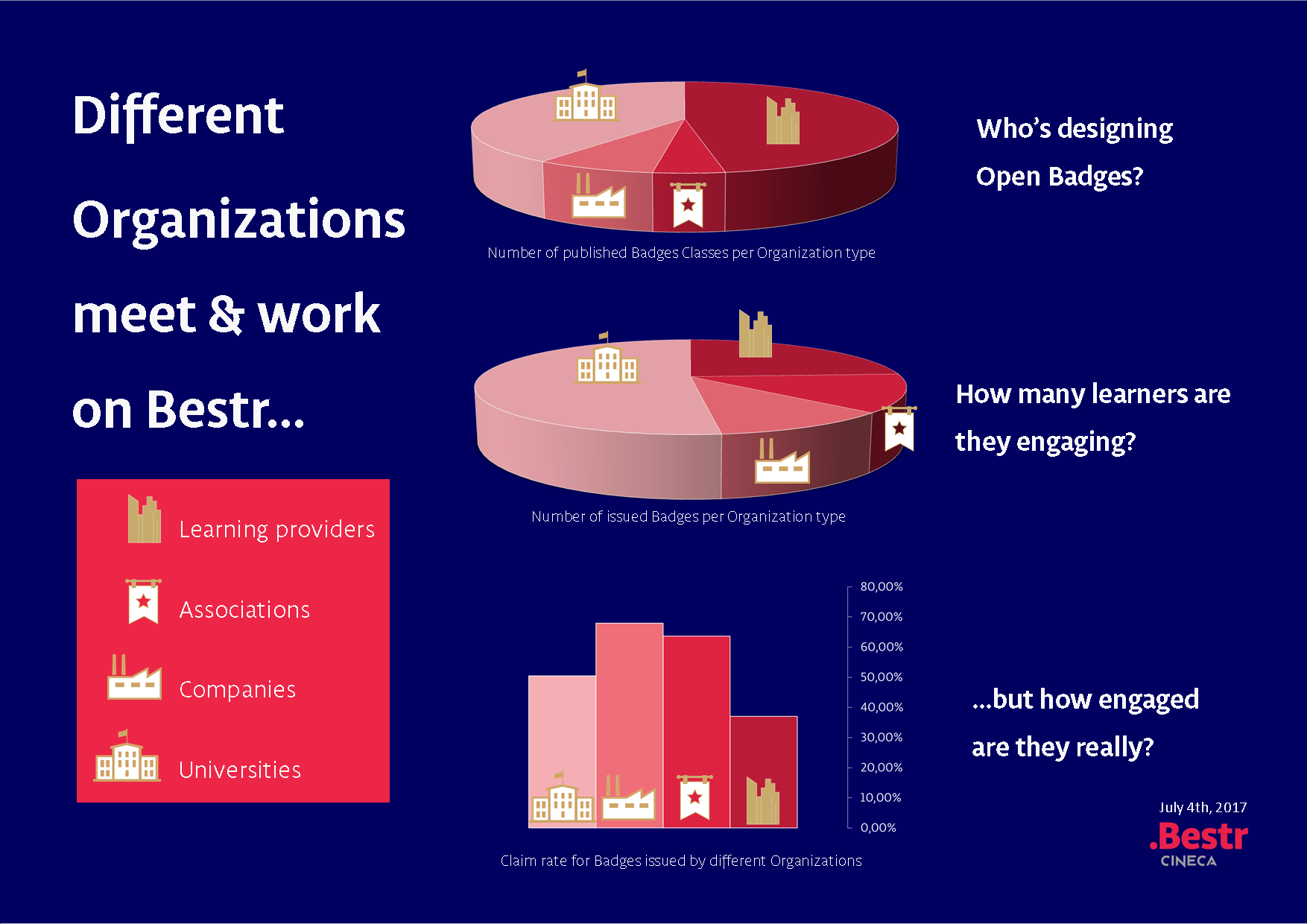 It is the trainers – formal and not – who, as is to be expected, create the highest number of Badges, thereby experimenting with a new method for giving prominence to their core activity.

Equally predictable is that the highest numbers of learners involved (measured in terms of Badges issued) are achieved by the universities, which have quite a wide, natural catchment area, while the non-formal trainers are by nature more specialised and often have catchment areas with local users.

A more surprising statistic is that concerning the claim rate, in other words how many learners actually respond to the issue of the Badge and come to the Bestr platform to claim it. From this point of view the greatest engagement is seen on the part of the learners involved from companies and associations: numerically they are less, but almost 70% of them respond actively to the issue of a Badge, compared to an average of 48%.

Second place for engagement is held by universities,whilst the associations and non-formal trainers record the lowest level of engagement - which may be explained by the fact that some training topics are more remote from digital contexts and therefore their recipients may be less sensitive to a digital attestation of competencies. This might be a useful element for reflection in the process of making the Open Badges an everyday instrument for the overall learner public.

The topics of the Badges

The arguments dealt with by the Badges are extremely varied, including soft skills and hard skills from the most diverse areas. 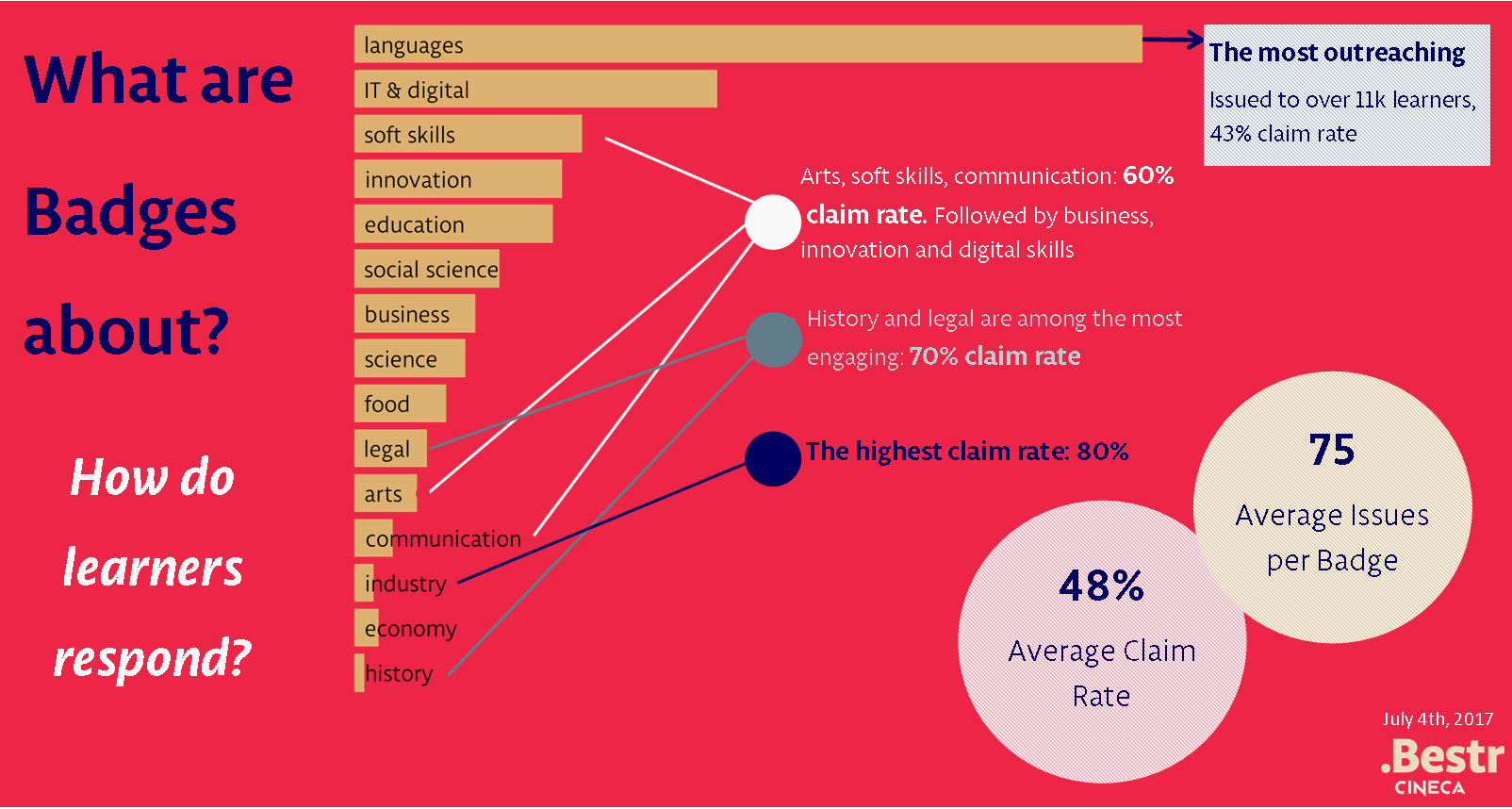 Highest in terms of purely numbers are Badges for languages, something which is obviously connected with the numbers of languages themselves, crossed with the levels of the European framework.

Next come the soft skills, to which we might also liken Badges on the subject of communication and, more generally, human sciences: the numbers here are not surprising, seeing that it is precisely the difficulty of certifying soft skills that is one of the engines behind the adoption of Open Badges.

Company and human sciences subjects at the top of engagement

The maximum engagement, again measured by the number of learners who actually claim their Badges compared to the number of Badges issued, does not come from the most widely spread Badges, but from the Badges on the subject of industrial innovation (3D printing, robotics, CAD), where there is a claim rate of 80%: this might be correlated to the high engagement already recorded for Badges issued by companies.

Where the competencies represented by the Badges are closely correlated to the world of employment, the learners are more motivated.

Practically as a counterpart to the first observation, a particularly high engagement (70%) is also recorded for art and legal topics, which may be interpreted on one side as a desire for recognition of competencies that too often seem, as a superficial observation, poorly considered and with little spending power, on the other side as a sign of the great need for for constant training on legal topics.